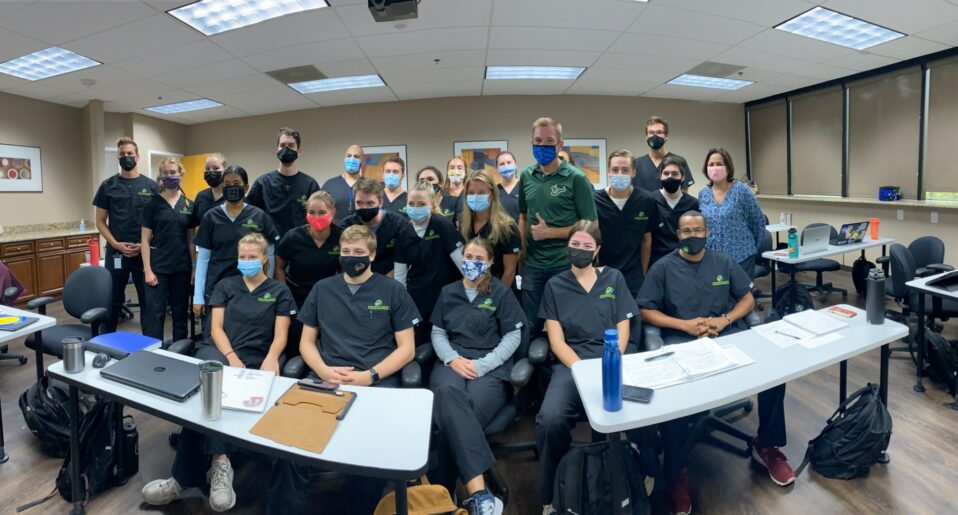 Special Thanks to Andrew Learned from the House of Representatives for taking the time to Visit IIOP to Learn about the O & P Profession, along with getting the chance to meet all of our students.

Andrew was born in Sarasota, grew up in Valrico, and graduated High School in Fort Myers before enrolling at the University of Tampa. There, he studied economics, and government and world affairs in addition to his duties in the Navy ROTC program. During his junior year, Andrew was elected as the Student Body President and served as Company Commander for his Navy ROTC unit.

While at UT, Andrew took internship opportunities with County Commissioners Mark Sharpe and Kevin Beckner, where he learned the ins-and-outs of local government.

After graduation, Andrew commissioned as an officer into the United States Navy, serving on active duty for four years. He was a Surface Warfare Officer who specialized as his ship’s Boarding Officer. In that role, Andrew led small teams on boarding operations throughout two deployments to the Middle East and North Africa. In 2014, as a Lieutenant, Andrew transitioned to the United States Navy Reserves.

When Andrew returned home, he sold his home and maxed out his credit cards to open a neighborhood learning center called GradePower Learning. His location has since become the #1 new franchise in the 140-center-strong Oxford Learning family and won the President’s Award the following year for being #1 overall. Andrew has also been personally recognized by the Tampa Bay Business Journal in 2014 as an Up & Comer Under 30.

In 2016, Andrew returned to active service with the Navy to be the Lead Surface Planner for Commander Task Force 51/5th Marine Expeditionary Brigade forward deployed to Bahrain. During this deployment, Andrew led surface coordination efforts during the crisis in the Bab-Al-Mandeb, when Huthi rebels were firing missiles at US and Coalition warships in the strategic choke-point. Andrew worked to protect and defend dozens of merchant shipping transits every day, thereby ensuring freedom of navigation for all friendly and neutral forces. For his efforts and service, Andrew received the Navy and Marine Corps Commendation Medal.

Andrew was elected to the Florida House in November of 2020. He’s married to his college sweetheart Amanda and has twin 8-year-olds Flynn and Lola keeping him on his toes. 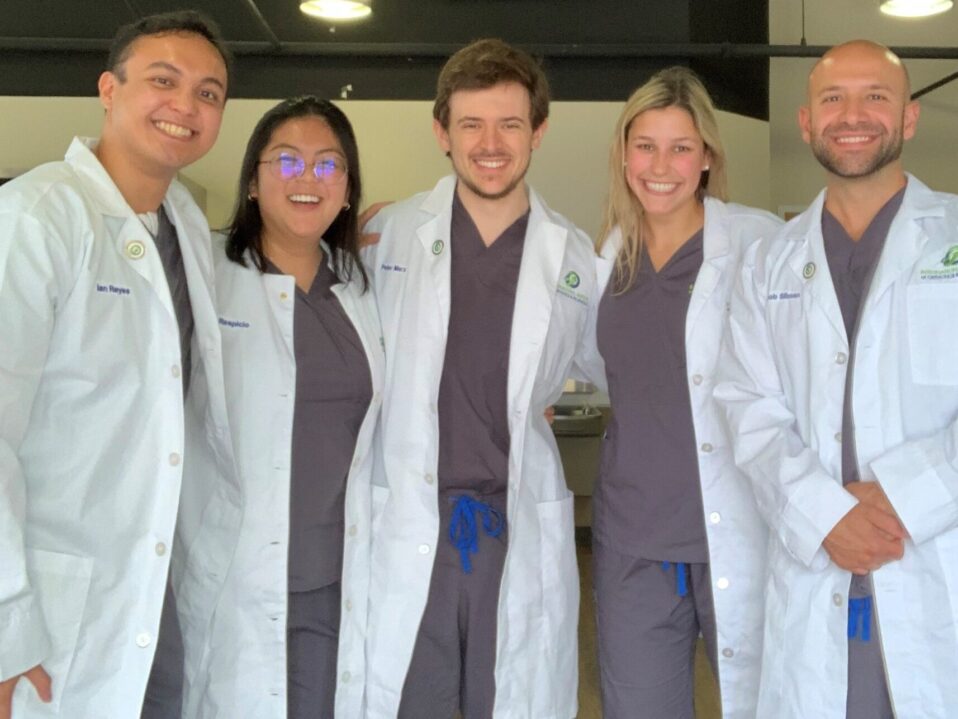 Today marks an exciting milestone for IIOP’s five second-semester students as they celebrate receiving their coveted white coats and took a professional oath to serve their patients and the O&P community. We were lucky to have the current President of the American Board for Certification of Orthotics, Prosthetics and Pedorthics, Anthony Ward, in attendance to address the students about some of the highlights of being a professional in their chosen field and the changes he’s seen throughout his years in the industry.

Family and friends of the students didn’t feel completely left out, as they joined in via Zoom. The five IIOP students that were proudly celebrated today are: Savanna Stumpf, Ian Reyes, Rene Respicio, Peter Marx, and Jacob Sliman. They have now reached the point in their curriculum where they will start to see patient models and simulate real patient scenarios. They are on their way to look and feel prepared in their bright white coats! 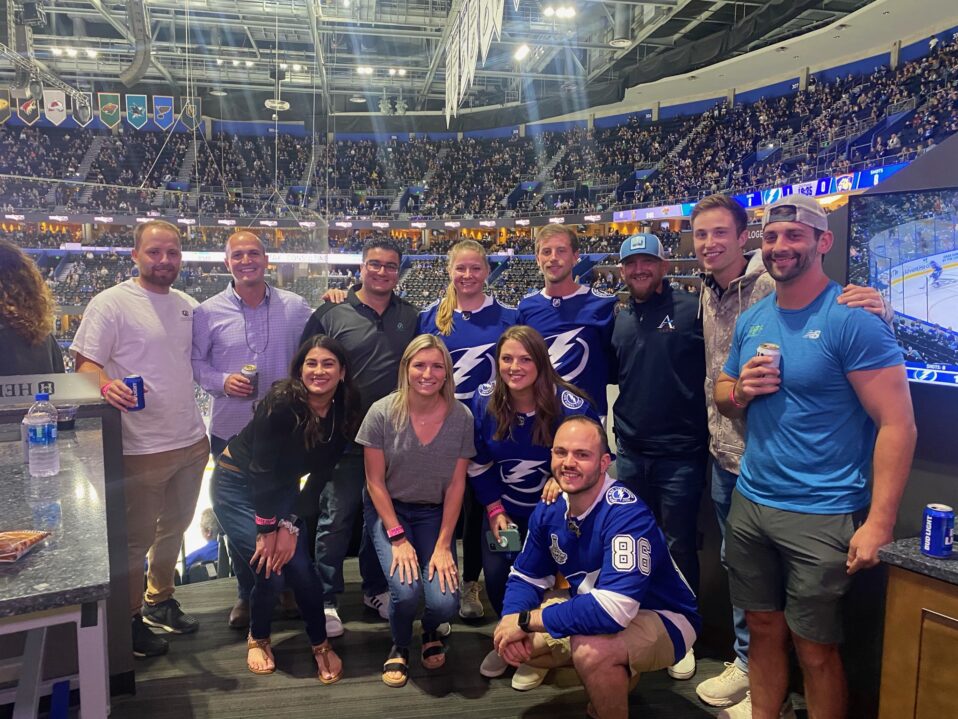 The students and staff of IIOP attended Game 6 of the Tampa Bay Lightning’s playoff series against the Florida Panthers. The Lightning defeated the Panthers with a dramatic 4-0 shutout to advance to the next playoff round. For some, it was their first professional hockey game ever, it also allowed classmates from different cohorts to bond over the shared experience.

IIOP thanks the representatives from ALPS South for attending the game and for their continued support of the Institute and our goals. 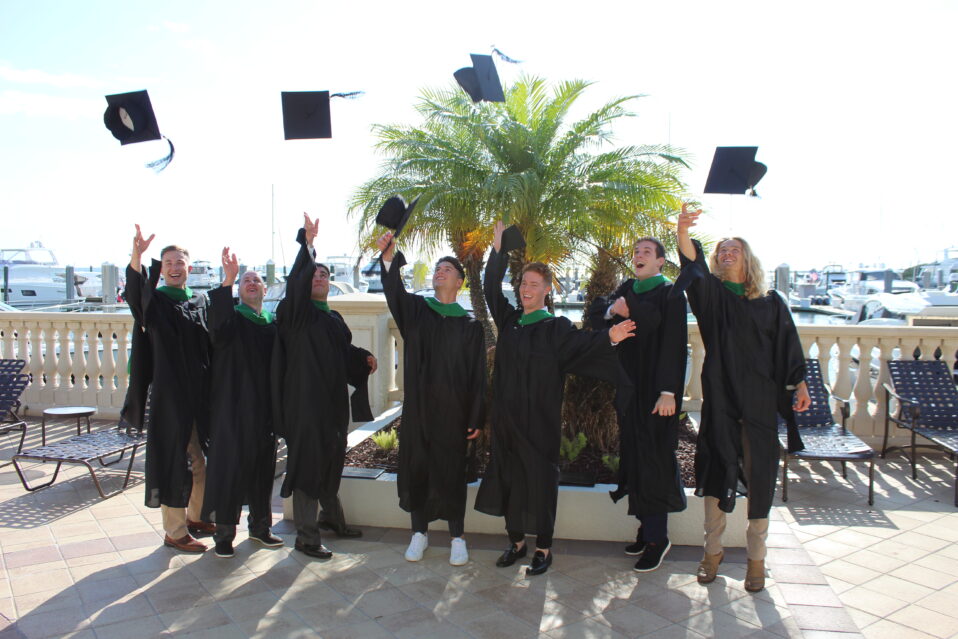 The first graduation ceremony in 2021 was an important celebration that the students and staff certainly deserved after a very tumultuous 2020. On Thursday April 29th, the most recent group of IIOP graduates were joined by their families and friends to be awarded for their hard work and perseverance.

Our special guest at this graduation ceremony was Gary Miracle, who has a personal reason for wanting to speak to a group of aspiring prosthetists. Gary tells a story of life-saving measures and loss of everything but hope. He lost both his arms and legs after a severe case of the flu, leading to sepsis and a 12 day coma. This all happened so quickly, Gary’s wife had to make the decision to amputate his limbs to save her husband’s life. Even despite her quick decision, there was still a very slim chance that Gary would survive.

Despite these odds, Gary survived his illness and on Thursday he drove himself to the ceremony, flanked by all four of his children. He made our guests cry one second from his story, and then turn right around and laugh at his well-timed jokes. He spoke about the role that a Prosthetist can have in changing a human’s life, and some of the battles he has faced with his still-recent amputations. Rest assured there wasn’t anybody in attendance that looked at Gary as anything other than an inspiration to all.

It is always a treasure to see another group of exceedingly competent graduates leaving to make differences in other’s lives. We at IIOP wish the best of luck to the Class of April 2021, Master of Science in Prosthetics and Orthotics:

If you would like to learn more about Gary Miracle and his story you can watch the following videos: 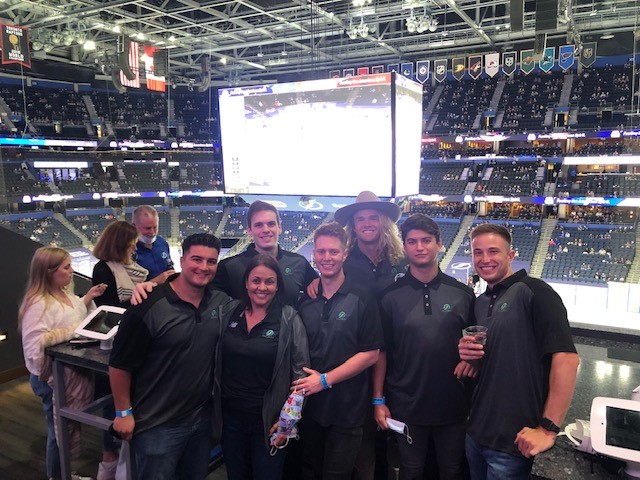 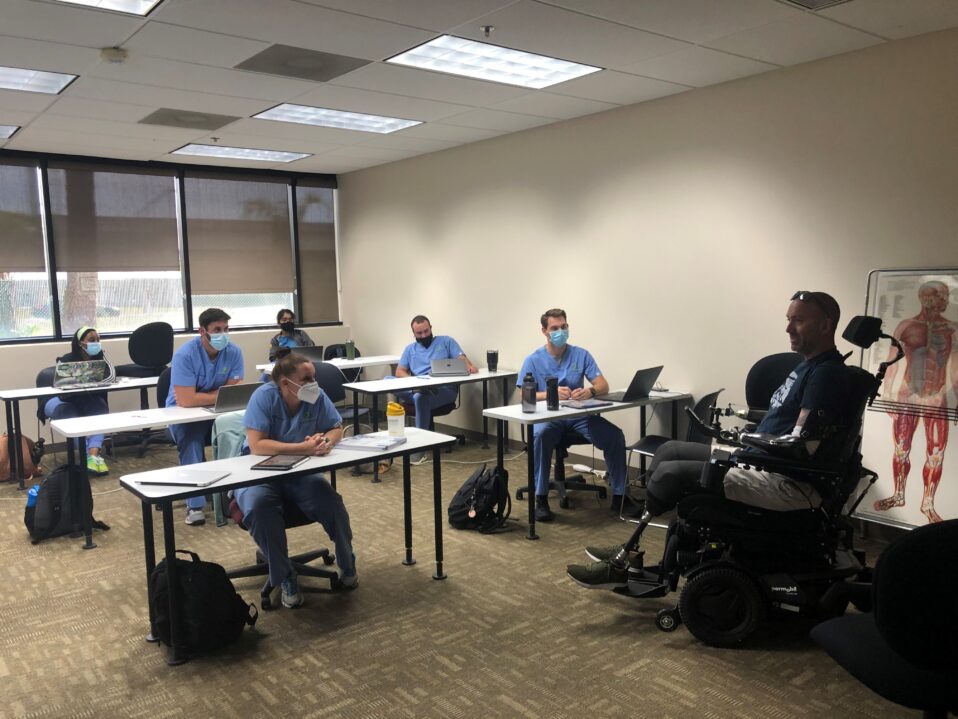 The Story of Gary Miracle 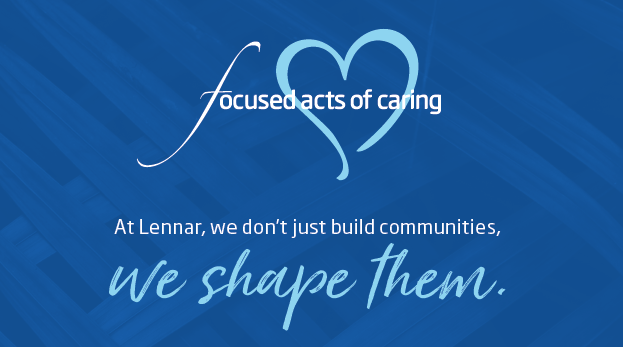 IIOP is proudly teaming up with Lennar Homes to provide a mortgage-free home for one lucky veteran. We are excited to make a dream come true for one of our nation’s service men or women who selflessly served our country. 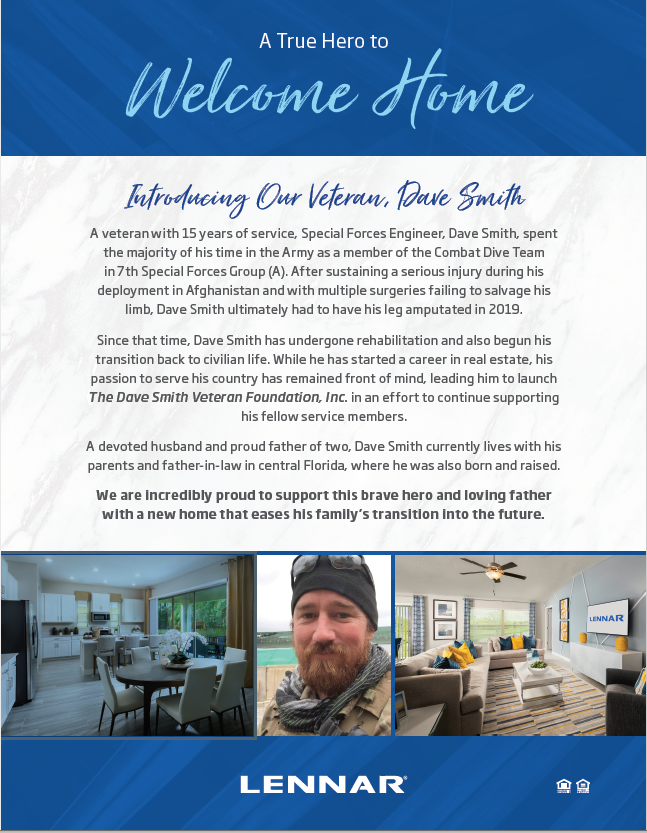 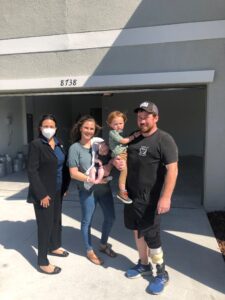 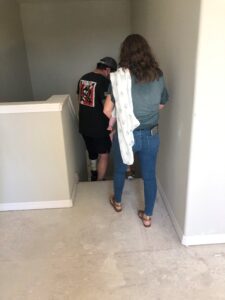 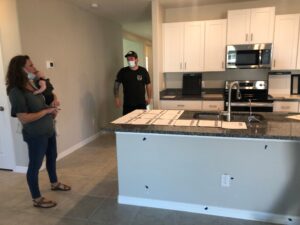 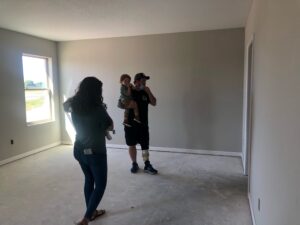 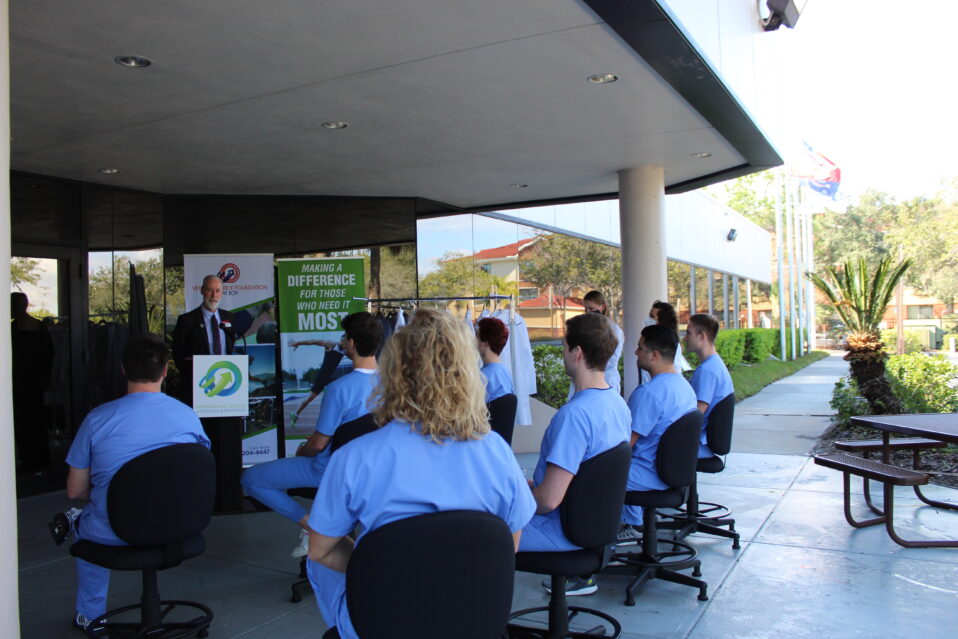 The students at IIOP are ceremoniously presented with their white coat sometime in their second semester before they begin learning in the clinical setting. For our current group of seniors, their ceremony came a little later in their journey thanks to the worldwide pandemic. Joined virtually by their friends and family, the group of seven soon-to-be residents took the oath to serve their professions with honesty and integrity and had a very special guest speaker to impart a bit of wisdom.

Steve Fletcher is a familiar face at IIOP since the ABC exams are hosted in part of the building. Today he was gracious enough to address the students about some of the challenges that O&P professionals can encounter and some of the stigmas surrounding the field. Of course, you can’t speak to a group of eager future CPOs without reassuring them that their field of choice is one of the most rewarding professions they could’ve chosen. We are thankful that Mr. Fletcher took the time out of his day to address the group.

It was a lovely ceremony and a beautiful day outside. Afterward, the students were able to relax a bit, throw the football and play a few rounds of cornhole. They certainly earned it.

Congratulations to the Graduating Class of 2020!

TO OUR 2020 IIOP GRADUATES WE CELEBRATE YOU!

On behalf of the faculty and staff at IIOP, we are thrilled to congratulate our 2020 graduates. With their families in limited attendance at the Westshore Yacht Club in Tampa FL, we had a wonderful sendoff for our seven new clinicians. Their next stepping stone will be Orthotic and Prosthetic residencies, but we will be seeing them again soon as they return for their ABC CPM Board Exams. We have the utmost confidence that each and every one of our new graduates will make IIOP proud, as they have during their time in the program. There have been strong friendships made and many lessons learned that will all be carried on to their next stages in their careers. 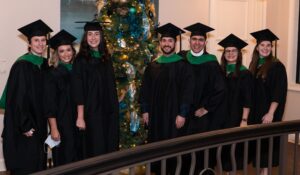 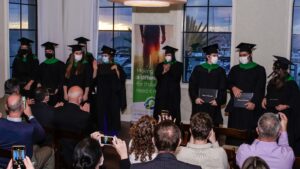 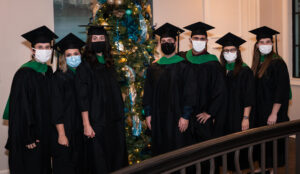 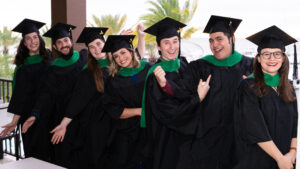 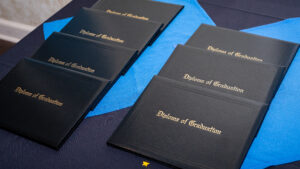 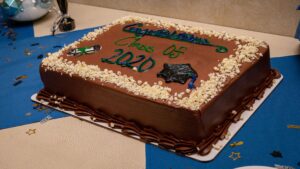 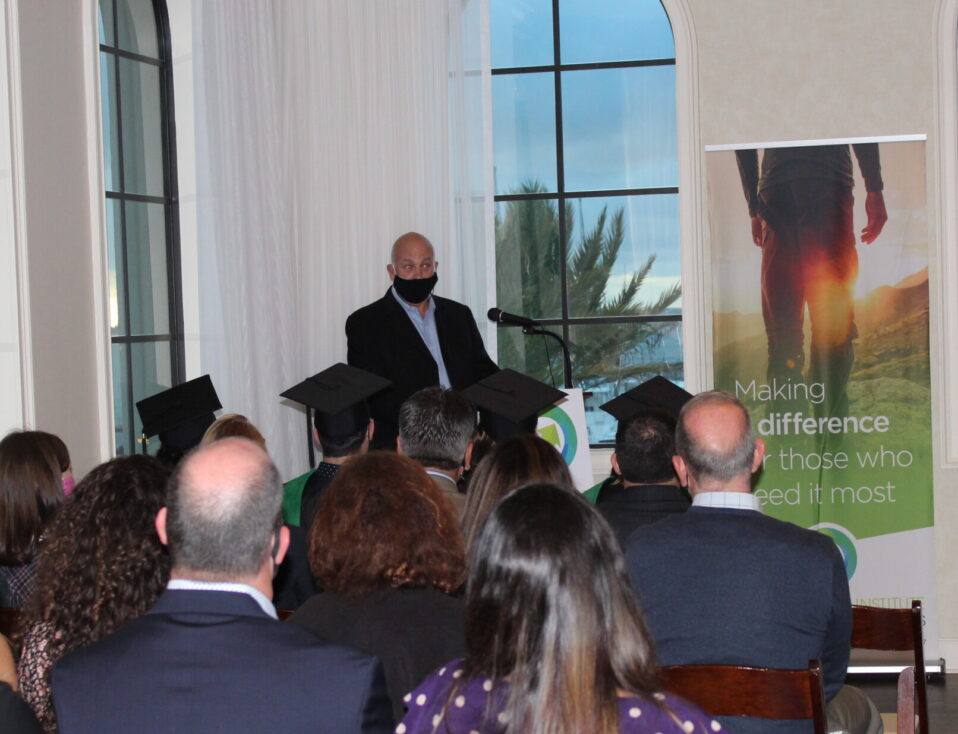 IIOP always very fortunate to have the support of fellow Orthotic and Prosthetic manufacturers and businesses. One of our first and most generous sponsors has been Orthomerica Products, Inc. Our neighbors to the East, Orthomerica has supported the International Institute of Orthotics and Prosthetics from its conception, and we are forever thankful. IIOP was thrilled to host several honored guests from Orthomerica’s team last night at our first ever graduation ceremony. OPI’s Vice President of Business Development, has made an impact in all facets of the Orthotics and Prosthetics fields, including marketing, regulatory, reimbursement, and patient care operations. Orthomerica Vice President of Business Development addressed our graduates and their families about not being afraid to take on new challenges, and about how the field has experienced changes with the entrance of new generations of practitioners. Also joining Orthomerica Vice President of Business Development, Orthomerica’s CFO George Arellano, cranial products manager Christina Hinton, and cranial services manager Rob Tetro.

As the students leave behind one chapter and embrace their new positions as residents, having the opportunity to speak with influential people such as our guests last night can go a long way. We hope that our friends at Orthomerica enjoyed the celebration and we are grateful and continue to appreciate their ongoing support.

Your ticket for the: Special Thanks to Orthomerica team for attending and speaking at our Graduation Ceremony