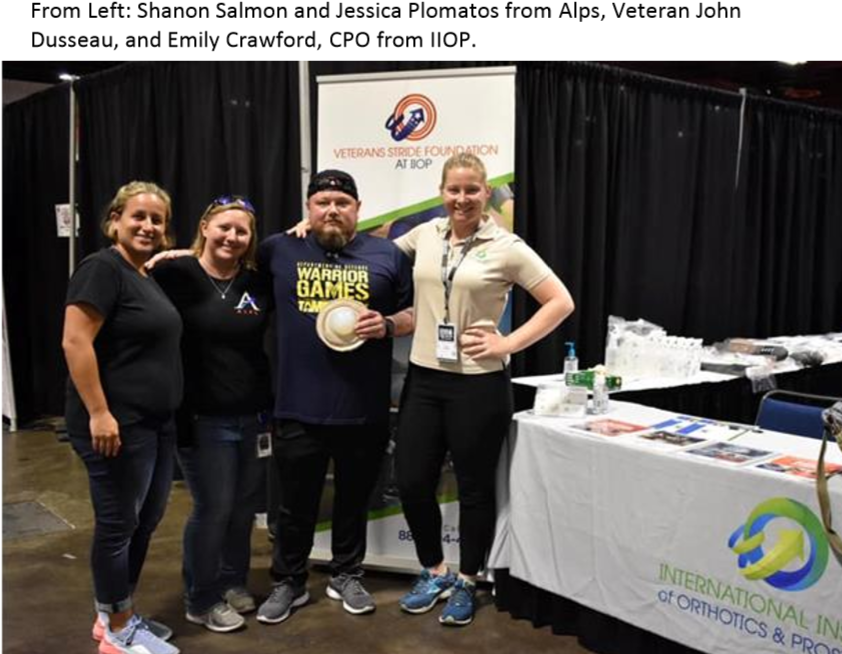 U.S. Navy Veteran John Dusseau came a long way from Detroit, Michigan to Tampa, Florida to represent his team at the Department of Defense’s Warrior Games. His specialty: shooting. What he didn’t expect was to return home with a pair of custom-designed silicone pads, stacked and sewn, to fill a void in his backside where a large portion of his glute muscles were removed during a surgical repair. The loss of his musculature led to pain in discomfort during long periods of sitting, and the pelvic obliquity due to lack of support was causing low back pain. John tried to create his own support using rolled up towels and T-shirts, but they lacked the proper balance of softness and support. John was introduced to the IIOP team, and explained what he needed, and within thirty minutes, they were on the track of creating the custom devices John would soon love. It started with a Silicone distal end pad manufactured by Alps in St. Petersburg, Florida. The X-large pad is about 6” in diameter and 2.5” in depth, which perfectly contoured to the concavity on John’s backside. The silicone material is very skin-friendly and is sometimes used to soften scar tissue following surgery. Using 6- and 9-millimeter thick prosthetic liner material provided by Alps with a fabric backing, the layers were stacked and tested for an afternoon before being sewn together. Six months later we followed up with John, who said “the design and materials [used] forms to my surgery site and gives me the support needed… I do not go on a trip without it.” We asked him too if he needed another pair, but he says they “still look and feel like the day I got them,” which speaks to the durability of both the silicone distal end pad as well as the silicone liner material used. From

Your ticket for the: IIOP and Alps team up to help Wounded Warrior Increase comfort and Function