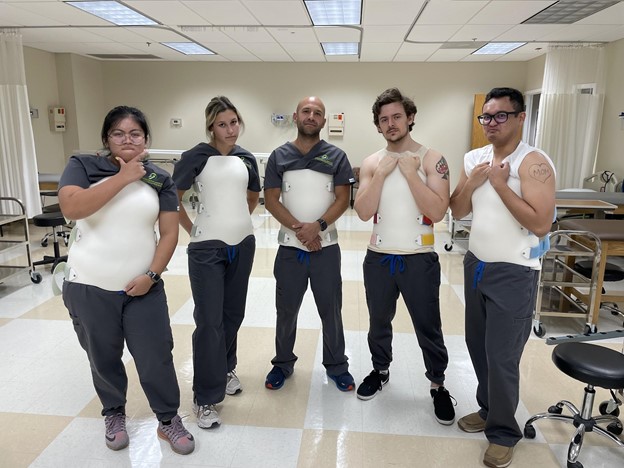 I: Yo yo yo this is the July Blog Takeover!

My name is Ian Reyes, aka DJD, aka Moneybags of SGA, aka Miguel Kings, and I’ll be writing the blog post for the month of July.

Joining me will be Rene Respicio, aka Dr. RESPECT, and Peter Marx, aka the better Marx Brother! El Presidente, Jacob Sliman, has no further comments at this time as he’s dealing with matters of (inter)national security (Student Government has been busy).

I: Soooo let’s take a recap of what we’ve been up to here at IIOP! We kicked off the month with a fantastic fourth of July. Some of us went home to our families and watched fireworks from the beach, like Savanna, while others got to stay here and watch fireworks in the middle of downtown Tampa:

I: Following our brief respite, we tackled our custom spinal orthotics courseware. We learned how to do our Cobb angles and set up our blueprints for custom orthotics with x-rays. We even made videos for ourselves so we have a record of how to do Cobb angles in the future. Mine took about 12 minutes, Savanna’s was about 20 minutes long, and Peter was able to get all the information in with a whopping 90 min long.

P: Yeah my phone almost died while recording, but I got it done! Check it out on my YouTube channel instead of watching a movie sometime.

R: Making videos is a great way to quickly revisit important topics months later. You’ll thank yourself when you start studying for boards!

I: Ms. Crawford had to watch all of our videos though so she’s the real winner here because she got to learn the material 5x over!

After learning how to blueprint, we got to use the 3D scanner and scanned our torsos into a 3D program to create models for our custom bivalve spinal orthotics orthoses. Then we got to use a 3D carving machine to create the models out of foam. The foam, when cut, kind of looks like parmesan, but it also definitely gets EVERYWHERE like parmesan. It can make you itch so word of warning to anyone who will use that foam in the future.

R: Note, it does NOT taste like parmesan. Be careful breathing this stuff in folks!

P: Also, if while editing your 3D scan in the OMEGA software you decide to jokingly make some unrealistic changes, be sure to remove said changes before carving your foam!

I: After the molds were finished, we got to pull polyethylene plastic over the molds, where we definitely got tanned by the ovens. I swear the cotton stockinette smells like gingerbread once it’s been heated a while, but it’s something you have to experience to believe.

P: I personally think the stockinette smelled more like pizza dough fresh out the oven but to each their own.

R: In my opinion, everyone’s TLSOs turned out amazing! It’s weird seeing my own mold. You could say it’s like an out-of-body experience 😀 As a bonus, we all ended up sewing our straps. Feel free to enjoy our creative direction in the photo-op attached.

I: We got to make our TLSO’s for each other but we treated it as if we were not going to see our patients until the delivery. We sewed our own straps for extra credit and went off our measurement sheets to make modifications. I’ll tell you what: we definitely had a blast once we finally got it all right!

I: Once we finished spinal, we finally started our first prosthetics class! Starting with lower limbs, we started learning about prosthetic leg components and feet. We even had a competition on removing a prosthetic foot out of a foot shell. The foot had to be removed with a shoehorn and had to be fully removed and then re-inserted. Rene had a rough start, kicking us off at 2 min and 41, but after her third attempt, she blazed through it sitting just under 10 seconds. I actually came in last place, at about 11 seconds (I got disqualified during my second attempt because the foot wasn’t all the way into the shell, but I would also have been around 9 seconds). The fastest two were Savanna and Peter, who settled the score with a sudden death match since they were both so close to each other after the third round. In the end, though, Savanna took home the gold with 7.11 seconds and won 4 pieces of chocolate.

And that pretty much brought us to the end of July. It feels like it was forever ago since I’m writing this 2 weeks into August. Time’s been flying fast and I can’t believe we’re almost done with our second semester. We’ve done a lot this month already, too, but I’ll let the Queen of Speed retake her final blog post for August. Tune in next time and thanks for bearing with us! Moneybags out!

Your ticket for the: July Blog Takeover